I have finally finished my second book, a memoir of my relationship with the Turks and Caicos Islands provisionally titled An Accidental Envoy, which I started writing about 18 months ago. I thought I had just about finished it when I was stuck in France late last year but I struggled with the final chapter. In the Turks and Caicos Islands 30 years ago I had my first experience of working directly for a government and I tried to find some parallels between the government at the time and that which we now have in the UK but our present government has been so unremittingly awful, incompetent, mendacious and corrupt that parallels have been impossible to find so I gave up.

Also, and my wife’s suggestion, I did a fairly major rewrite of various sections where, if I am to be honest, I recognise that I was largely trying to increase the word count. The finished draft is about 50,000 words, similar to my Foyles memoir and I think that is acceptable for what is only intended to be a fairly light-hearted read. It is now back with the copy-editor, an Indian freelancer who I found through the Internet. He did an excellent job on the first draft: English language is taught brilliantly in India and educated Indians are meticulous in its use.

I’m delighted that Jamie Noonan has agreed to design both the cover and the inside; I was very happy with his significant contribution to An Accidental Bookseller, the sales of which have been very satisfactory. Having finally got the Turks and Caicos Islands off my desk I intends now to return to writing about Africa. I have established a great writing space in the garden summer house which we had built in the middle of last year, from which I am p 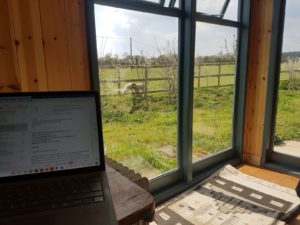 resently looking out at the new season lambs gambolling (there really is no better word) in the adjacent field where, at only a couple of months old, they are already displaying the characteristics of human teenagers, forming gangs which chase each other round the field. They of course will have a very short life but they are unaware of that and the life they have seems to be one with a decent amount of joy.

Having just celebrated my landmark 80th birthday I intend to spend some of what time I have left documenting the part of my life not covered by the first two books, probably not for general publication but so that my grandchildren will know a little more about their grandfather.