Twice before I have been to Japan, and then I thought it the most alien country I had ever visited. It is eminently cultured and civilized but I could find little common ground with the people. We did not share a sense of humour, one of the defining characteristics of a culture. On this visit when I had very little social interaction with the Japanese the sense of humour difference was less obvious: I was there not on business but to enjoy the country and the Rugby World Cup.

On my first visit more than thirty years ago I was struck by the ‘solidness’ of the country; I felt that again on this trip. European capital cities show their age, in cracked paving stones and infrastructure which struggles to cope with the demands put upon it: Tokyo, in stark contrast, works. In our 17 days there I didn’t see a single traffic hold-up and when one train was delayed a couple of minutes (on a journey of several hundred miles) the apologies were profusive. Standards of cleanliness far exceed ours: I cannot recall seeing a single piece of litter, public toilets wouldn’t be out of place in a brand new hospital.

On that first visit I was also struck by the quality of the cars, models which in our interconnected world didn’t seem to be exported. I recall, when returning from that trip, talking to the BMW importer in Qatar and suggesting that Nissan and Toyota would become competition – he thought that was impossible. BMW of course are still in business but now Lexus regularly beat them in the rankings. And the train service of course is the finest in the world. We visited Kyoto, Hakone and Nagaonsen, travelled on shinkansen (bullet trains), slightly lesser expresses and the metro and couldn’t fault them. On the shinkansen, travelling at 185 mph, the guard, on his patrols, gives a little bow to the passengers as he enters each carriage and again when he leaves. The contrast with Virgin Rail, of which I am a fan, is stark.

So much to record and remember but for now I’ll restrict it to highlights:

Lunch at Kyubey Ginza Sushi with three ladies from the Wakimura family, with which my family have been friends for some 85 years. The finest sushi in Tokyo prepared in front of us by a chef who looked like an extra from Bridge on the River Kwai, wielding the wickedest looking knives I have ever seen. It was the only time I have seen something killed in front of me then served for my delectation; only a prawn, but even I felt a twinge of guilt watching it’s little eyes beseeching me as its neck was snapped – a few seconds later I was given its skilfully dismembered body atop a patty of sticky rice. Very tasty it was too, poor little crustacean.

The England Argentina Rugby World Cup match at Tokyo stadium. Not the best rugby but a wonderful experience. En route from the train station to the stadium we peeled off from the stream of spectators into an inconspicuous traditional restaurant and had delicious food in a private booth. 6000 miles and a whole culture away from The Cabbage Patch at Twickenham. On to the match, no queuing for beer as delightful young ladies circulated throughout the stands selling Heineken. The usual wonderful spirit which is always found at rugby internationals, then train back to central Tokyo. Not the crush that is post-match Twickenham but an orderly flow of people carried back to the city by an orderly flow of trains.

Traditional Inns, ryokan, at Kanazawa and Hakone, both with wonderful dinner and breakfast served in the room, the former with paper dividing walls, shoji, and futons laid out after dinner. 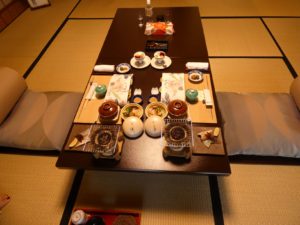 It had outside hot-spring-fed baths, onsen, on the roof, with a view along the wooded river valley, just beginning to shade into autumn. 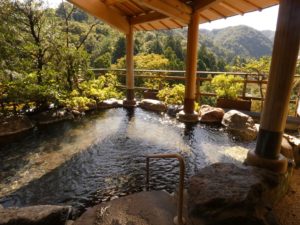 Quiet beauty, balm for the soul. The latter, on our penultimate night, was a spur of the moment booking made on the train after our travel plans were disrupted by the typhoon, probably the most expensive hotel room I will ever enjoy. A duplex apartment with living/dining room upstairs, a ‘western’ bedroom downstairs and a veranda with a private open-air onsen then woodland. Dinner came with a wine list which had a number of wines costing more than £1000 per bottle including three vintages each of Chateaux Margaux, Latour and Yquem, the latter in whole and half bottles. This in a hotel with only thirteen rooms! We opted for the least expensive bottle, an acceptable New Zealand Sauvignon Blanc at a modest £55. In the morning the water, of course from hot springs, was too hot to get into – luckily there was a cold tap. An amazing experience at an eye-watering price.

And of course sitting through a major typhoon, in the bar on the top floor of our hotel having a night cap looking out through a plate glass window down onto a street devoid of people or traffic, the few small trees whipping around below us but otherwise absolutely no sensation of wind although the centre of the storm passed right over us. Yet 80 people died. Strange.

We returned home determined to re-visit.