You are here: Home / Books / Launch party at Foyles

My memoir An Accidental Bookseller has finally been published! On Monday we had a launch party at Foyles, attended by 170 people, a great mixture of family, friends and book-trade people (most of them also friends – the book-trade is a very friendly business). There were 18 members of the Foyle family, all descended from my grandfather William (none of us called Foyle of course – my (Foyle) mother took her husband’s name, as was the custom – the only Foyle there was the author Naomi Foyle who is no relation.) 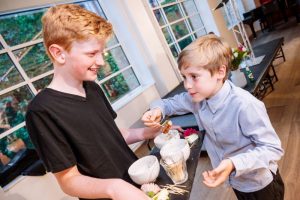 There were several author-friends there and two great poets Ruth Padel and Imtiaz Dharker. Imtiaz read out a poem written in 1980 by Wendy Cope, which describes brilliantly the chaos of Foyles during the time of my aunt Christina; I wanted that so in my speech I could contrast it with the beautiful and efficient new shop which Foyles now inhabits. 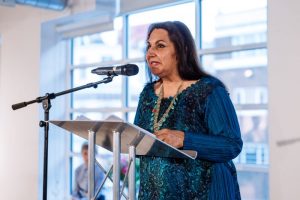 (I last heard Imtiaz read on a moonlit night in the desert in Dubai, a beautiful and moving poem about her late husband Simon who died a few months after she appeared at the first Emirates Litfest: I was not the only one moved to tears.)

One of the delights at my stage of life is introducing friends to others who will enrich their lives. My wife Vivienne’s niece Kassia works in conservation and has recently returned from Myanmar: Ruth Padel is passionate about tigers (and is the great granddaughter of Charles Darwin). I introduced them and they have arranged to go to Myanmar together.

It was a great evening. Skimming through the excellent photos taken by Leo Johnson I am struck by the relaxed smiles on almost every face and by the diversity of the people there. And we sold 130 copies of the book! 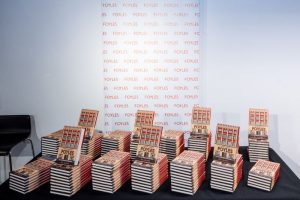