You are here: Home / Food / Palestine

I returned recently from my second trip to Palestine when again I was struck by the complete disconnect between the perception of Palestinians in the western world and the actuality. I then got into a long rant about the injustice of it all but since you’ve all heard that hundreds of times I’ve shunted that to the end. Don’t feel obliged to read it – I just need to get it off my chest from time to time.

The intention was to plant some olive trees, one for each m,ember of our families, a commitment which was made late last year when I brought together a small group of friends, each one a force for good in the world, who I thought could do more good collectively than individually. As it happens we hadn’t yet managed to buy the necessary land so that planting has been deferred till next year.

Last time I visited, nine years ago, I came via Tel Aviv. That was as unpleasant an airport experience as I have ever had – the Israelis treat anyone visiting Palestine as a criminal, so this time we travelled via Amman and across the Allenby bridge, which was mildly chaotic but not unpleasant. The young Israelis at the border crossing deal with Palestinians every day and no doubt recognise that they are no different to anyone else and treated all with respect, unlike those in Tel Aviv. We were met in Jericho by our host and my dear friend Suleiman, Soli.

There is something magical about these old Levantine cities, known from childhood Sunday school readings. Now largely surrounded by modern development their hearts still resonate with history. In addition to Jericho, during our trip  we visited Nablus, Jerusalem and Bethlehem, all of which have been home to the ancestors of the Palestinians for more than two thousand years (despite the claim by the Israelis that they were settling in ‘a land without people’).

With us were three other friends, all visiting Palestine for the first time. We stayed with Soli and his boys for 5 days. Highlights were wandering in the old city of Jerusalem which is one huge market surrounding the Temple on the Mount, the Western (Wailing) Wall and the Church of the Nativity, shops selling spices, ancient artifacts, cheap modern ‘religious’ souvenirs and everyday requisites including one selling bath taps; visiting a couple of nursery schools which Soli designs and builds in Gaza and the West Bank; Soli’s wonderful cooking from expansive breakfasts built round eggs, tomatoes and olives to chicken cooked in yoghurt with aubergines, tahini and pomegranate seeds; and picking olives with an extended family of farmers, engineers and teachers. 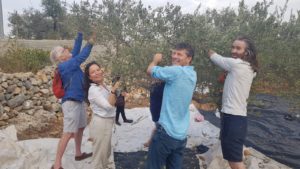 A wonderful short visit: We’ll be back next year to plant our own olive trees.

Let’s start with the actuality. The great majority of Palestinians living in the West Bank carry on their daily lives in the cities where they have lived for thousands of years, peacefully and usually cheerfully in the face of serious and continuous provocation from Israel through their tacit support for the illegal settlements which continue to spring up. Israeli law, to which Palestinians are subject, allows the State to confiscate any land uncultivated for three years, which it can then make available for ‘settlement’;  The settlers regularly burn and cut down Palestinian olive trees, yet the perception is that it is the Palestinians, not the Israelis, who are terrorists. Gaza, which I haven’t visited, is a refugee camp housing 1.8m people, the great majority of whom are descended from those forcibly removed from their villages by the new nation of Israel in 1948. A tiny minority of them show their frustration and anger at being abandoned in their overcrowded camps for 70 years by the western world by throwing rocks and sending homemade low-tech rockets into Israel which responds with the full force of its American funded army with its ultra-high-tech weaponry. I suggest that anyone reading this asks themselves what they would do if driven out from their ancestral home and, innocent of any crime, confined to a huge internment camp for 70 years. 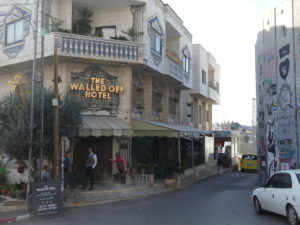 Years ago I listened to Tony Blair giving evidence for the Chilcot report during which he said ‘Saddam was funding the Palestinians, the terrorists.’ With an unchallenged drip feed of such propaganda coming from those in positions of influence is it any wonder that the perception is so far from the truth?