You are here: Home / Books / Thoughts on trees

When Mr and Mrs Sheldrake named their son Merlin they must have known he would weave a little magic into the world, which he did with his fascinating book Entangled life: how fungi make our worlds, change our minds and shape our futures. This  partially inspired Elif Shafak to write An Island Without Trees in which one of the characters is a fig tree. Having recently read, and greatly enjoyed, both I began to think of the various trees which have figured in my life.

Behind my childhood home there were several hundred acres of common land, mostly bracken and gorse, in the middle of which stood a gnarled old oak tree whose spreading limbs offered easy opportunities for a little boy  to climb and under which my sisters and I would picnic. On one occasion, when I was six, we were approached by a man in the stereotypical grubby raincoat, who flashed us. One of my older sisters lifted a large lemonade bottle and said ‘if you don’t go away I’ll hit you’. Sensibly, he went away. I was not particularly afraid, I had my big sisters and the old oak tree to protect me. I recall wondering why he had what I took to be a kipper sticking out of his trousers.

When my grandfather bought Beeleigh Abbey, his lovely home in Essex, there was a magnificent old walnut tree in the middle of the large lawn. It was beginning to die, the occasional falling branches a potential danger and Grandad had it felled. From its rich, dark wood he had a dining-room suite made by the carpenter at Foyles, a table, six chairs and a sideboard, a present to my mother. Round that table we had our family discussions and arguments. It now graces the home of my middle sister and whenever I visit I stroke its silky surface with a patina acquired over 70 years and remember Grandad and Beeleigh.

I was once part-owner of a residential club on the shores of Lake Naivasha in Kenya. At the time the clubhouse was perched on a bluff 50 feet above the papyrus and water lilies fringing the lake, below which was the skeleton of a long-dead tree, offering its arms as perches for eagles and pelicans as they scanned the water for fish. At the end of the day I would sit with a cold beer, admire the beautiful old tree, watch the resident hippos splashing in the shallows as they got ready for their nocturnal forage and feel serene. 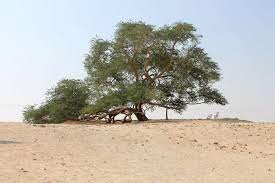 Years later, living in Bahrain, I would on occasion visit the centuries-old Tree of Life, which thrives in the harshness of the Arabian desert far from any other tree. I visited late one afternoon with my eleven-year-old daughter Emma after one of our regular trips out into the desert. When we came to leave just before sunset my car got bogged down in the fine sand and everything I did to get us out only served to dig us deeper in. Just as we were about to give up and trudge the mile or so back to the road a young Bahraini appeared in a 4 x 4. He offered to help but told us he needed to collect a tow-rope from his village a couple of miles away. Before driving off he stuck a wooden perch in the ground and put on it a falcon, calm within its leather hood; ‘please look after her till I get back’, he said, and drove off. Emma and I sat in the sand as the sun set and the stars began to appear and watched over this calm and beautiful bird, another moment of serenity by a tree. The Arab returned, pulled us out and we went our separate ways.

In the forests south of Perth in Western Australia the magnificent Gloucester Tree, a giant Karri, rises above the forest canopy and has at its top a platform used as a 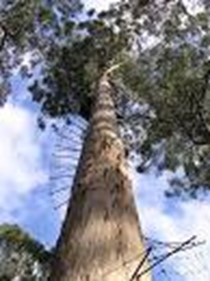 lookout post when there is a danger of fire. Some twenty years ago I climbed it, using the foot-long pins driven into its bark as a ladder, the only security being mesh netting wrapped round the outside. Passing those going the other way was a nerve wracking experience but the view from the top, nearly 60 metres above the ground, was worth all the effort. Looking down on the forest canopy an eagle glided beneath me and I was a child once more, king of my castle. Returning to earth I visited a showroom of forest products and on impulse bought a dining table carved from a single vertical slice of a jarrah tree, another forest giant, which now sits in my house in London, one of the most beautiful, and certainly the heaviest, pieces of furniture I own.

Years ago I bought a house in Cornwall, expecting to move there in my retirement. It sits alone in a hollow below the A38 in Twowatersfoot, named for a merging of streams into the River Fowey. At the top of the drive stood a 350-year old oak tree, its branches spreading out towards the road; this tree became a wonderful old friend to greet us whenever we visited the house. Years later a similar tree a mile along the road was blown down in a gale, narrowly missing a passing car; the Highways Authority surveyed all trees close to the road and informed us that ours had tip death, it was dying, and its death warrant was issued. One night the road was closed. Tree surgeons arrived, set up arc lights and I brought up a chair and sat to watch, not in the spirit of the tricoteuse sitting watching executions by the guillotine but to try to offer comfort and to say goodbye to an old friend as it was slowly put to death. I sat there for 4 hours while its giant limbs were removed and its gnarled old trunk taken down in slices. I thought of all that the tree, born in the reign of Charles 1, had seen, watching as people travelled between the market towns of Bodmin and Liskeard along a cart track which gradually became a tarmac road. I wept at times, and at midnight the surgeons departed leaving at my request a six-foot stump to mark the place where a magnificent tree had watched life for three and a half centuries. It remains today, decked in ivy and housing its own mini-ecosystem, and I remember my old tree friend whenever I see it. Graham, who has tended the gardens since I bought the house, built a bench, the back of which is a slice from the tree’s trunk; I sit on it at times, looking along the beautiful wooded Glyn Valley and thinking of how trees enrich our lives. 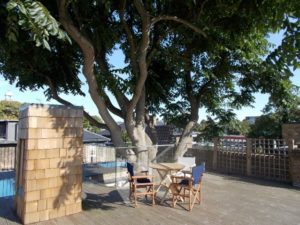 for sale in Camden Mews, intriguingly named The Tree House. I went to see it and knew immediately it would be our London home. It was built in 1984 around a tree, probably about 60 years old at the time, an ailanthus altissima, tree of heaven, of which many were imported from China in the 19th century to grace the parks of London. We had the house completely re-modelled; the tree grows from a small courtyard on the ground floor and we can admire it from our bed through full length glass doors; the first floor is open-plan living, round a large glass box in which the tree continues upwards, to emerge into our roof garden over which it offers an umbrella of shade. There have been many occasions when we have sat inside watching squirrels sitting in the fork where the trunk divides. Trees have added beauty and serenity to my life. Now I share my house with one.

I am expecting another tree to come into my life later this year. Suleiman, Soli, one of  a small group of my closest friends, is buying a plot of land in his ancestral village of Ramadin in the south of Palestine where we will plant olive trees for each member of our families. Along with each of my grandchildren I will then own an olive tree in what, in spite of my lack of religion, I still think of as The Holy Land.